Construction Defects and Their Legal Liability

Construction Defects and Their Legal Liability

The aim of a construction defect case is to necessitate the responsible party to rectify and correct the defect. Usually, any complaints against defendants claim breach of warranty, breach of contract, negligence or strict liability.

Under the law, the general contractor, developer or subcontractor is obligated to employ a certain degree of knowledge, skills and care that are normally employed by building professionals. This duty of care includes all parties who could possibly be injured or aggrieved by the construction defect, as well any future purchasers. The parties answerable for the irresponsibility of their subcontractor are the general contractors and developers.

A homeowner is able to sue the developer or builder under privity of contract theories. These include breaches of obligation stated in the documentation of the purchase and/or any instructions for escrow. This normally surpasses a failure on the part of the builder to construct the home in a manner conforming to the specifications and plans.

Most often, the purchase documents between the homeowner and the developer state a warranty in regards to the property’s condition.
The law states that the individuals that build and sell new construction need to be held responsible to what is stated in the warranty, and that the finished property was both designed and built in an acceptable manner, with high-quality workmanship. Builders and vendors are subjected to the supposition that the property built was constructed to be sold, and should be used for a certain purpose.
Homeowners are able to waive, and builders may deny implied warranties in some states. If there is a disclaimer included, they are interpreted against the developer or seller. In most cases, it’s hard to enforce a waiver. 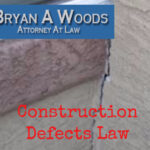 It’s a big responsibility to own a home, as it carries with it ongoing maintenance costs and concerns. The last worry that needs to be on your mind is a construction defect which was caused due to negligence by another party. If you think that your home’s defect is the consequence of someone else’s negligible actions, you should think about filing a claim. You can have your claim reviewed by an experienced construction lawyer and get some peace of mind.